WASHINGTON, DC – In an announcement made today by The Deputy Mayor for Planning and Economic Development (DMPED) for the District of Columbia, The Menkiti Group and Enlightened, Inc. in partnership as MLK Gateway Community Partners, LLC (MGCP), have been selected to develop the MLK Gateway site at the corner of Martin Luther King, Jr. Boulevard and Good Hope Road SE, in Historic Anacostia. 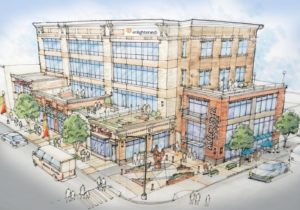 The Menkiti Group designed a $25 million, 50,500 square foot MLK Gateway project dynamically programmed with office and neighborhood-serving retail. The project is anchored by Enlightened, Inc., an award-winning minority-owned information technology firm with over 200 employees worldwide. Enlightened, Inc. will relocate its nearly 150 District-based employees to a28,500 SF office at the MLK Gateway, and also plans to launch a technology incubator to groom growing tech firms to do business with the federal government. 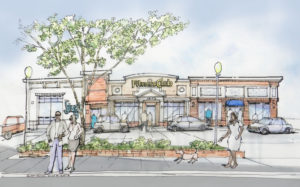 In a press release issued earlier from DMPED, Deputy Mayor for Economic Development Brian Kenner acknowledged the primary needs of the community as met by the MGCP winning proposal, saying: “This development delivers on our mission to drive economic development in all corners of the District so every resident can share in our city’s prosperity.  I look forward to seeing MLK Gateway reach its full potential and ensuring this historic community has access to the quality retail and jobs they need and deserve.”

Bo Menkiti, founder and CEO of The Menkiti Group, stated: “We are proud and honored to have been selected to develop the MLK Gateway in Historic Anacostia. As a mission-based company, The Menkiti Group is fundamentally committed to investing in neighborhoods and in partnering with communities. In partnership with the residents and businesses of Ward 8, the District of Columbia, and Enlightened we will catalyze a thriving, diverse, and economically vibrant MLK Gateway.”

Of significance to the economic and social impact of the project is Enlightened Inc.’s commitment to relocate its corporate headquarters to Anacostia. Antwanye Ford, CEO of Enlightened, Inc., noted: “The MLK Gateway project presents an unprecedented opportunity for our technology company to set down permanent roots in the District of Columbia, allowing Enlightened to bring good-paying technology jobs and a business incubation platform to Ward 8, which has historically lacked investment and opportunity of this magnitude.”

A summary of the MGCP proposed redevelopment for the site may be found HERE.